Cities are facing major transport issues. Firstly, there is a global road safety crisis where an estimated 1.25-1.5 million people are killed on the world’s roads every year, and between 20 and 50 million people are seriously injured  (World Bank 2014). Road transport deaths exceed those from HIV, tuberculosis, or malaria. Injuries and pollution from vehicles contribute to six of the top 10 causes of death globally  (Bhalla et al. 2015), and road injuries are the number-one killer of young people ages 15 to 29 years. Secondly, the increasing use of vehicles over time has led to higher levels of air pollution, which has a negative impact on health e.g. respiratory infections, Chronic Obstructive Pulmonary Disease (COPD), and lung cancer. Noise from motorised transport accounts for a significant health burden including mental health impacts and cardiovascular disease. The transport sector also indirectly affects health through climate change pathways by accounting for 25% of global carbon dioxide emissions; 75% of which arise from road transport (UNECE). Economic impacts related to congestion and accessibility and social problems due to poor mobility and inequality are also felt most harshly in low-middle income countries.

Africa has the highest road traffic fatality rate in the world (26.6 fatalities per 100K population (ODI, 2017 ) due partially to poorly planned cities leading to dangerous traffic environments. In central and eastern parts of sub-Saharan Africa upwards of 50 per cent of deaths are pedestrians. At a human level every road traffic accident affects individuals, families and communities. In many cases families are uninsured and so face large medical bills they are unable to afford, especially with the loss of a livelihood. They then face a struggle to avoid falling into poverty.

Road crashes cost an estimated 1% to 5% of GDP in developing countries (WHO 2015 ). In addition, congestion is another a major economic disadvantage. Therefore, improving transport in African cities can lead to positive effects on national income growth as well as a solution to providing basic services and reducing poverty.

The Sustainable Development Goals by the United Nations Development Programme has set a target of halving the global number of deaths and injuries from road traffic crashes by 2020.  ODI (2017) identify possible solutions to reach these.

Providing safe infrastructure for walking and cycling e.g. having clear, uninterrupted and segregated pavements and bicycle lanes can help to reduce people’s risk of being involved in  road traffic accidents as well as reducing their exposure to motor vehicles emissions. Other traffic calming measures help to reduce vehicle speeds, such as the use of speed bumps, curb extensions, chicanes, and roundabouts  can also improve road safety and improve accessibility.

i-CMiiST is focused on two East African cities, Kampala (Uganda) and Nairobi (Kenya). Whilst both are very similar in terms of facing rapidly expanding populations due to rural-urban migration, they also face significant mobility challenges partly as a legacy of historic land use planning which failed to foresee the huge growth in population but which also prioritised road space for private vehicles rather than mass-transit (buses) or non-motorised travel (walking or cycling). 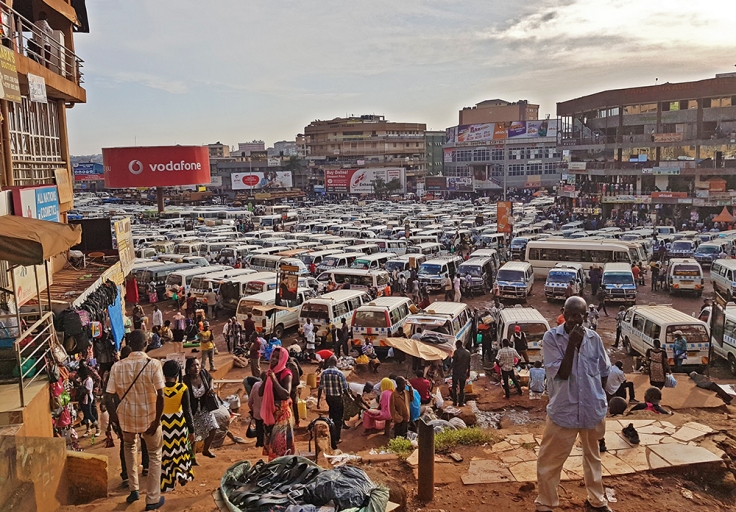 The lack of an integrated public transport system in both cities has led to high congestion, high numbers of road accidents, and poor air quality. In Nairobi, matatus (mini-van taxis) are prevalent and add significantly to the traffic congestion and are often involved in road traffic accidents. And in Kampala, boda- boda (motorcycles) are ubiquitous throughout the city. Whilst they provide citizens with a quick and cheap mobility option they also contribute significantly to the issues. Numbers of boda-bodas have increased 58 per cent per annum since 2000 and there are now close to half a million of them (UNECE 2018).

So what can be done? i-CMiiST is working with the city transport authorities to identify how creative methods can be used to engage with different stakeholders around road transport issues and to identify possible solutions. The project is doing this in close collaboration with the creative artist community and transport experts.

The project has identified a number of case studies where these have been used. Click here for further details.